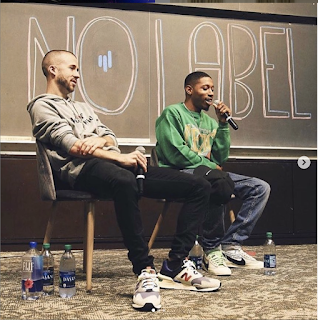 On Friday, April 19th, Cousin Stizz, Tim Larew, and No Label Live teamed up for the event of a lifetime.  I was able to listen to Tim and Stizz speak about their experiences in the rap game.
During this event, Cousin Stizz and Tim Larew talked about the days before they signed their current deal with RCA Records as well as their present day lifestyle. Tim Larew elaborated how he started a blog which gave him opportunities to meet many local rappers including Cousin Stizz, Jefe Replay, and Michael Christmas. Stizz mentioned how he spent most days in the studio and sending completed songs to Tim.  Stizz talked about how Tim would give him honest feedback on the songs and even though he sometimes would not like the answer he would get back to the studio and keep working.
After Stizz released his first two projects “Suffolk County” and “Monda” (named after a close friend who died of cancer), he moved out west to Los Angeles.  It was there where he recorded his most recent project “One Night Only”.  Stizz mentioned how he needed to make a routine for himself music-wise so he could keep pursuing his dream.  Stizz would be in the studio every Monday, Wednesday, and Friday.  Stizz elaborated about how he wouldn’t leave the studio until he finished the number of songs that he said he would make that week.
After about an hour and fifteen minutes of being able to listen to Stizz and Tim talk, No Label opened it up to the crowd to ask Cousin Stizz and Tim Larew questions. Listening to the questions asked and the answers Stizz gave he really showed how much he loves his home city of Boston.  He mentioned how he always wants to do something special for Boston whether it's giving back to the city or a special one of a kind concert.
Directly after the Q&A, Cousin Stizz stayed at Harvard meeting his fans who he cares so much about.  He met everyone he possibly could and I was able to talk and get a picture with Cousin Stizz who is personally my favorite rapper.  This opportunity at Harvard was something I will never forget and if you are ever in town for a No Label event, I highly recommend that you attend.
Location: Cambridge, MA 02138, USA