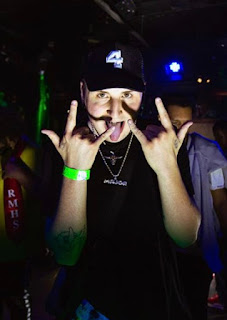 MajorBaby, once a kid in high school messing around making parodies and remixes has started to make a name for himself in the rap game. Releasing songs such as Stereotypes, That’s Life with Bouvé, and Puffy Coat have allowed MajorBaby to make a name for himself rapping, but this isn’t the only thing MajorBaby can do. MajorBaby is also a songwriter who has had the opportunity to get his songwriting to a larger platform. He talked about he has “started to cut tracks for a lot of dope people in the industry.” By the way, MajorBaby made that sound we should all keep an eye out for some upcoming songs written by him.
MajorBaby grew up all around hip-hop. He said, “when I was a baby that is all my parents would listen to.” MajorBaby mentioned how his mom would always send him raps that she wrote, he mentioned how she would write like Will Smith. He also talked about how artists such as Mase and Lil Wayne have inspired him as an artist. MajorBaby elaborated on how he “always loved Mase because of how cool he was.”
MajorBaby has made a lot of tracks with some well-known features on them. When I asked MajorBaby who his favorite artist to work with was he said Bouvé. MajorBaby elaborated about how working with Bouvé on a track “always comes off so natural, and it’s always a good time.” He also mentioned that they “have an unreleased tape in the steamers.”
MajorBaby represents the number 4 where ever he is. When I asked him about the number 4 I made the mistake of asking it as my fifth question. MajorBaby said “I don’t really know what 4 means. I hope everyone thinks of me whenever they see it though.” If you go through any of MajorBaby’s social media platforms you will always see the number 4 no matter if it is in the photo, caption or comments.
MajorBaby is someone who always wants to have fun with his music. He talked about how the energy in his music is always genuine and everything he says is real to him and the people around him. MajorBaby mentioned how he likes to try new things and he feels “after years of doing this I’m finally finding my sound and doing what I like.” MajorBaby is an upcoming artist and songwriter who has big things planned for his future. We all need to keep an eye out for what MajorBaby is going to do next.