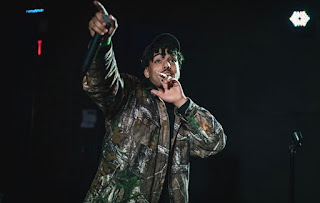 Heath240, born and raised in Jamaica Plain is starting to create a buzz around Boston.  Heath started rapping in his sophomore year of high school which was a time in his life where he was “wildin out”. Heath told me “multiple things and people inspired me to make music.”  He said, “as musical influences go Andre 3000, Kanye and Chance the Rapper have all been a major influence on me creating music.” Heath commented on how each of those artists has unique and individual sounds.  A personal mentor to Heath is the late Brother Ox. Heath mentioned how “Brother Ox pushed me to be expressive and creative when I didn’t have any inspiration.” Through this motivation and hard work, Heath has released songs such as OFF IT, 24K (Rose Gold), and L.A. which have combined for over 22,000 streams on SoundCloud.
Recently Heath has been earning more opportunities throughout the country as he was able to travel to Chicago to work with one hip-hops elite producers Supa Bwe. During his time in Chicago, Heath and Supa Bwe made the song 24K (Rose Gold) which is Heath’s most streamed song on SoundCloud. Supa Bwe is known to have worked with artists such as Chance the Rapper and Lil Yachty. Heath240 also has another great opportunity when he is an opening act for Nessly when he comes to the Middle East Downstairs on July 13th.
When listening to Heath’s music you notice his unique voice and sound in each song.  When asked how he feels his music stands out against other Boston artists is “I have a unique sound to my voice and I pick a more upbeat production.  A lot of rappers now just rap on trap beats but I’m starting to break the mold.” He said you will see a lot of this on his upcoming project which is coming soon.
Heath240 journey to fame has just begun and he will soon be making noise around the country once his new project drops and continues to grind with big names in rap.  The future for Heath240 is bright and I am excited to see what is in store for Heath in the near future. Make sure to check out his music on any of the major streaming platforms.