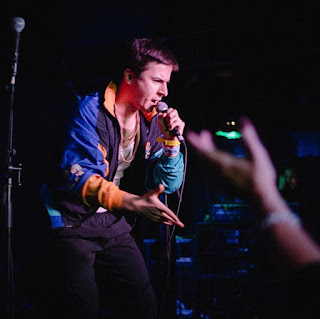 At age 11, Greyhound started to make music himself, he had also started playing the cello at the age of 8 and shortly after starting to make his music he pickup up the bass. At the time, he was into punk rock, and wanted to start a band with his buddies. He wrote his first rap at the age of 13 and was releasing his music on YouTube. He would record his music with his Rock Band USB mic. At the beginning he had a lot of doubters telling him his music sucked. At the time, Greyhound listened to them, however he kept making music, but wouldn’t release it publically. When he was 20, he decided that he wanted to finally release his music and stop selling himself short. Greyhound has now release an album, and doing lots of shows in the Boston area.
One of Greyhound’s biggest influences in music was Eminem. Greyhounds said “I fell in love with rap through Eminem’s “Recovery” album. I was 12 when it came out.” Greyhound also mentioned “So ultimately, as cliche as it is for a white rapper, Eminem really got me into rap. He talked about being bullied and angry, all this shit I could relate to.”
Greyhound’s music is a very unique type of music, he's willing to talk about his past. He mentions “ I am willing to talk about some dark stuff. I used a lot of drugs as a teenager, I dropped out of college and got into some seriously bad situations. I talk about this stuff in my music.” He also utilizes his melodies and will try to mix them with difficult rhyming patterns, he likes to be experimental with his music and get a message across his craft.
Greyhound’s fans should expect big things in the near future he says “My fans should expect nothing but high quality material. I record “Out of the Shadows” primarily in my bedroom closet, aside from “Hide in the Light” which I did in some guys basement in Dorchester. The quality is ok, but I listen to other people who work with professional engineers and all that. That’s my plan going forward. Also I am putting nothing but dope content out going forward. I should have at least 3 songs more before 2020.” Greyhound is on a grind that nobody can get in the way of. He is determined to be something special and that is the attitude everyone in music should have.