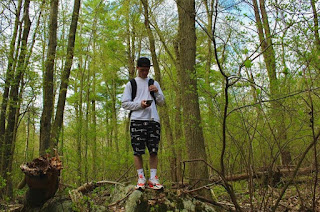 In high school, 157Owen had only released a couple songs, however, once he graduated, he realized he wanted to give music his best shot. 157Owen has “always enjoyed listening to musicians who had stories to tell within their lyrics and always wanted to express myself and who I am in a similar way. I guess you could say that going through the roller coaster of life along with having a love for music is what helped inspire me to pursue a path in with this.” 157Owen will always make sure to express his own meaning in each of his songs.
Recently, 157Owen released the music video for his new song “ON MY MIND.” 157Owen said “ Filming the video for “ON MY MIND” was a unique experience because going into it we really didn’t have any set plans for any of the scenes. I remember we were sitting in my living room just knowing we wanted to shoot a music video while trying to come up with location ideas until one of my homies said he knew some spots in Middleboro so we just kind of went with it. We ended up near some train tracks with some barbed wire fences which fit the vibe perfectly and we just rolled with it. None of it would have been possible without my homie @JakePutMeOn being so lenient with us freestyling ideas moments before leaving for the shoot.” 157Owen also has a lot planned for the future. 157Owen has a lot of video shoots coming up and he has a lot of collaborations that he is excited to release, however, he won’t give out the names for right now.
157Owen is grateful for all of his friends that have supported him from the start of his career. He said “I’m real appreciative of all of them for being with me no matter what. Out of my friends that are closer to music I’ve always worked with my homies Nix (@_kidnix_) and Chiddy (@ch1ddy), they’ve always been the ones mixing my songs to get them sounding right and giving me pointers on how to improve as an artist.” 157Owen’s future is very bright and he is looking forward to what he is able to release in the near future.