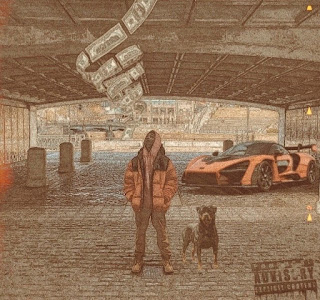 DJ Kari is inspired by two very talented artists who have both lost their lives. The first is Juice WRLD, he was the one who inspired DJ Kari to make music. The second is Pop Smoke, who inspired him to start making trap music. DJ Kari started making music when he was 13. He would go to the studio with LIZZLE4 and other younger kids who wanted to rap. They made a few songs and called themselves the “West Boyz.”
DJ Kari’s music stands out. He says “I can make an amazing sounding melodic sound and I can make an amazing sounding drill song. When I make drill music I also put singing vocals on the track. There is no rapper/artist in the world that makes music like me. I truly am the definition of different.” His fans should expect a lot more music out of him as well as music videos. Specifically a lot more drill music, which is where he will “also put singing vocals on the track.” DJ Kari made a promise that his music will improve each and every song, beginning with his song “Famous” which comes out May 15th.
DJ Kari is very grateful for the people around him, he mentioned “If it wasn’t for my manager/best friend Isaac Wheatley I would not hold my Music to Such a high standard and my good friend Julian Massari.” DJ Kari also gives a lot of credit to his close friend Julian Massari who works for Bay State Productions and credits him for having content on his YouTube page. Lastly, DJ Kari wants to thank his fans who always have his back. DJ Kari has a lot of new music coming out very soon, and he is excited to share it with the world.