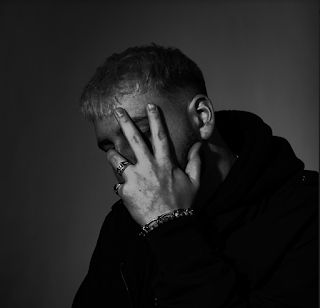 Friends usually inspire most artists. In glvsshouse’s case, it was his mom and dad. glvsshouse said, “My Dad and Mom were the inspiration behind my music at first. They had always pushed me to express and be my truest self. It was never weird for me to have choir practice then go play a hockey game for my city. I feel like that wouldn’t be the case for every kid growing up in the 2000s. My parents made it feel normal and I’ll always appreciate their support for my musical endeavors.” Going to those choir concerts helped glvsshouse realize music was a passion he was born with. He would always entertain the thought of pursuing music and finally decided to start his freshman year of high school.
Over the past few years, glvsshouse has spent a lot of his time perfecting and experimenting with his music. He says, “I know my music is genuine. Everything I talk about is real-life situations. This is how I express myself and get everything off my chest. This isn’t the case with everyone nowadays. I’ll always stay true to who I am and that’s why my music will ALWAYS stand out, this is MY sound and my unique way of expressing myself.”
Recently, glvsshouse and Donald Grunge released an EP titled “Vacant.” glvsshouse recalled the day he and Donald Grunge met in LA and said, “Donald Grunge and I made about five songs the first day we met in my LA apartment and I was like “damn this kid works so fast.” We instantly had a musical connection.” From that day on, glvsshouse and Donald would work together frequently. A few months ago, glvsshouse’s manager Peter was able to bring both teams along with the idea of releasing an EP for Boston. glvsshouse mentioned, “We already had most of the music made so all we had to do was come up with the creative concept that plays off the current times (COVID-19 pandemic/quarantine).” The EP was released on May 15th and has already accumulated 100,000 plays on Spotify.
When glvsshouse moved to LA from Massachusetts, he didn’t do it alone. He moved there with Mike Hector, who is now a Grammy-winning producer. glvsshouse described his friendship with Hector and said, “we really dealt with a lot of the same problems so it's always been cool to have his perspective on things. He was the first producer to extend his hand to me, and he’s helped connect me with some very legendary people.” While in LA, glvsshouse was able to meet his graphic designer Mark Saint. Saint has been working on his craft since he was 15 years old and played a significant role in making glvsshouse’s brand stand out. In the music industry, having a good manager is essential. glvsshouse’s manager Peter has been able to do so much for him. When talking about, Peter, glvsshouse said, “We have a very dope friendship which makes decisions and planning that much easier. Peter brought my passion back into the brand side of my music and really set me on track for greatness.
For the future, glvsshouse has A LOT of new music and videos releasing soon. He can’t give away too much right now, but he hopes that everyone is enjoying his newly released EP “VACANT” with Donald Grunge.