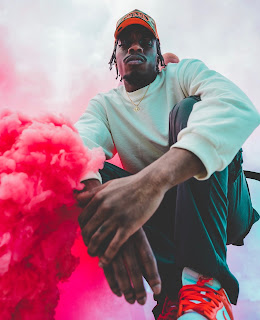 In 2017, which was Juxi’s junior year of college, he would rap in his basement. He used music as an outlet to kill time, he would use his ironing board as his table and rap for as long as possible. Juxi’s friends at school really enjoyed his sound and would tell Juxi that they “know nobody who sounds like him.” Since Juxi decided to take music seriously, he has released songs such as “Night Time” and “Bigger Me,” which have combined for over 50k plays on SoundCloud. Juxi also released his first EP earlier this year, called “In No Rush,” and he has so much more to come.
Juxi credits his friends and family for inspiring him to take music so seriously. One friend specifically is Cousin Stizz, Juxi describes Stizz as a “great mentor.” Juxi also mentioned, “seeing how he (Stizz) did it and how the city has love for him really motivates you.” Cousin Stizz has been able to introduce Juxi to artists such as Smino. Those little things Cousin Stizz has been able to do for Juxi really motivates him.  Juxi believes that the people he surrounds himself with have really played a significant role in his career so far.
Throughout Juxi’s career, he has been able to be on big sets, attend and perform at music festivals and much more. However, Juxi doesn’t see any of those as his biggest opportunity so far in music. Juxi doesn’t see the biggest opportunity because he sees his career as one big journey. Juxi says, “I had to go through one situation to get to another situation, so I feel like this whole journey has been so death-defying, I have learned so much about myself and as a creator.” Juxi also mentions how everything so far has come full circle for him.
A place that has provided Juxi a lot of opportunities so far is D.P. Entertainment. Juxi mentioned, “D.P. Entertainment Let me be in control of my creative vision, they don’t tell me what they think I should do, always hear what I want to do and give me feedback.” Juxi credits D.P. Entertainment for getting him established as an artist and always finding ways to make things happen even though it could be hard.
If you have listened to Juxi’s music, you will notice his signature ad-libs, especially at the beginning of the song, when you hear, “It’s JUX.” Juxi knows those ab libs are part of the reason why he stands out as an artist. Juxi knows that there isn’t anybody who sounds like him. When describing his music, Juxi said, “I rap what I live, I don’t rap about the guns, chains, or the jewels, it’s all fun vibes.” DJ So Drewski of Hot 97 was able to get a taste of Juxi’s music. They said Juxi’s sound was one they haven’t heard before. With Juxi having such a unique sound, his possibilities are endless. Juxi will always make sure to connect with his fans and will make sure they get to know him as a person through his music.
Post COVID-19, Juxi plans on having his first headline show and selling it out. He also wants to have a listening party for his EP “In No Rush” as he feels he “owes it to his fans” as people have always wanted a project since he started rapping in 2017. He was glad he released the project as it was a relief and guidance to it, as the music he releases in the future will be more consistent with what he is doing now.
When Juxi was asked about the City of Boston, he said, “Boston means a lot to me, Boston has been through so much as a city not with just sports.” Juxi goes on to talk about how Boston has not been able to have the spotlight that it should have on it, but believes more people are coming around to see what Boston has. Juxi also credits Boston for making him who he is today, he believes that Boston has been able to shape him as a person. Juxi knows that it is time for Boston to win musically. He mentions how New Edition, NKOTB, and Benzino have all made strong runs for Boston in the music industry. Juxi described Boston’s music scene with a great sports analogy for the Boston music scene. He described it as the World Series, which we haven’t been able to win in a long time. He says “You’ve Stizz up to bat right now, and I am rooting for him to hit it out of the park, and he can’t be the only one up to bat, and it's the next man up, and I’m trying to get in line, I’m in the batting cage right now practicing my swing because when it's time for me to get to the plate because I’m trying to Babe Ruth that shit.” Juxi is an artist who is determined to succeed and is ready to take off. Juxi is always happy to see everyone else succeed as “there are always enough seats at the table.”