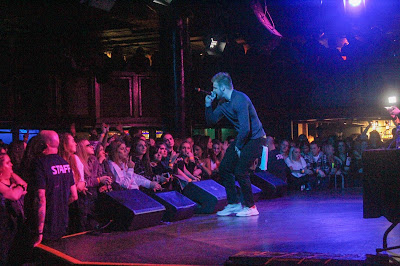 In 2012, TJ Hickey got cut from the hockey team at Union College. TJ felt he lost a piece of himself that he “always took pride in.” Little did he know at the time, it would open up a whole new world for himself. TJ used to rap for fun in high school but never took it too seriously. Once hockey was taken away he started to dive in and he has now made a career out of it. In TJ’s early 20’s, some of his close friends were making music, so he would help them out. TJ said “As I got deeper into it I started realizing I could make it myself and saw guys like Mac Miller and Sammy Adams take off and it gave me more drive.” TJ is currently closing in on 100,000 monthly listeners on Spotify. TJ has released many remixes such as his “Look at Me Remix” which is close to 2 million streams on Spotify. TJ has also released original songs such as his most recent song “All on Me” which features Sammy Adams.
Throughout TJ’s career he has had some moments where he has had to say to himself “wow I really did what i wanted to do a year ago." TJ has been able to work with artists he would listen to and was able to tour with a few of them. TJ has toured with Huey Mack, Futuristic, and Cam Meekins where they “sold out a lot of those shows and had 300-700 people every city we went.” TJ has a lot of things for his fans to look forward to in the near future. TJ mentioned “The next 6 months will be the biggest 6 months in my 7-8 year career so far. There will be so much music this summer (almost weekly) and some big time features I'm super excited about.”
When asked about how his music stands out TJ responded with “I don't think there's anyone as versatile as me. There are a number of artists who change their sounds and sing and rap but I don't think there's anyone who does it as drastically as I do. I have so many different influences that I actually think it hurts me in a way because people don't know what to expect from me - I have no "sound" or "brand". I can even change my vocals so it sounds like two different artists on the same track let alone 14 different artists on the same album. I've never claimed to be the best rapper or the best singer but I think my ability to change my style of music as consistently as I have is what separates me.” TJ always makes sure to put 110% into each song he releases. For people who haven’t checked TJ’s music out, you can notice how talented he is the more and more you listen to his music.
I talked to TJ’s close friend Sammy Adams about TJ and he said “TJ and I come from the same town which is super hard to make it out of because of the fact that it’s sink or swim. He’s been one Of a few I’ve always been like... “damn... that shit is fire in terms of bars!” But this dude put together a song with incredible writing and at this point I’m not impressed..I’m just hype that he’s gotten to a point where his writing whether hook, verse, or whatever is as strong as it is. We throw shots at each other knowing the brother mentality that it’s all love at the end of the day. The whole making of this record was organic, pure, and honestly on some homie shit!”
I was able to talk to TJ about special people and places that mean a lot to him. He mentioned his manager Matt Keene, as well as his engineer and producer Nox Beatz. TJ said they both are people who have supported him since the beginning of his music career. TJ also gave a lot of credit to Sammy Adams as he is an artist that has helped him navigate the music industry. The last thing that means a lot to TJ is Boston. He said “Boston is home. I was born and raised here, moved to the suburbs when I was 16, then moved back to the city after college. I've been lucky enough, because of touring, to see hundreds of different cities around the country and Boston will always be my favorite place to play and be.” TJ Hickey will continue to work as hard as he can throughout his entire music career. TJ Hickey is a name you will be hearing a lot more of very soon.