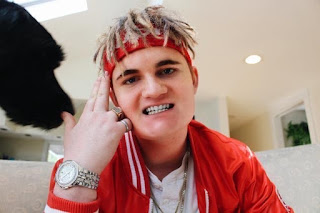 Before moving to Massachusetts, Big Finny used to live in Northern Virginia. At that time, he was 12 years old. He enrolled in a School of Rock program where “kids advance their abilities to sing or play an instrument through lessons that come with the program. Then the kids rehearse a themed setlist of already written songs, so in other words covers. After a number of times kids are given the opportunity to perform on stage at various venues.” Big Finny started as a singer but decided to move to the drums. It was at that time where he met a few aspiring rappers who were 25-26 years old. The day Big Finny chose to bring his basic studio over to the rapper's house, he started to fall in love with rap. He began to make covers, and his friends encouraged him to keep pursuing rap.
Since Big Finny has moved to Massachusetts, he has dropped out of school to pursue his dream full time. Because he dropped out of school, he has opened up so much more time to work on his craft. Big Finny has been able to create his recording studio. Having this recording studio allows him to make money to put towards his music and will enable him to record whenever he pleases. This access to a studio has allowed Big Finny to work on different sounds for his music. He says, “my fans should expect various styles from headbanging hard shit, to the catchy soft stuff. I am using my versatility more and more and expanding myself as an artist. I haven't really talked about it too much on social media, but I am currently working on a 15 song album.” Big Finny is looking forward to his post-COVID-19 life; he is hoping to finally perform on stage. He has been doing whatever he can to get booked for shows. Big Finny describes himself as an “extreme extrovert.” He feeds off the energy from his fans and friends, which makes him even more excited about his fans' experience once he hits the stage.
Recently, Big Finny has been going on Instagram live doing “quarantine dares” with some of his closest friends, such as Tyre$$e X. These Instagram lives can’t miss entertainment. With Big Finny having a lot planned for the future, but for now, he wants you to check out his music, such as his songs “MF Livin” and “Till We Fall” and tune into his Instagram lives, which take place every night at 8 PM.