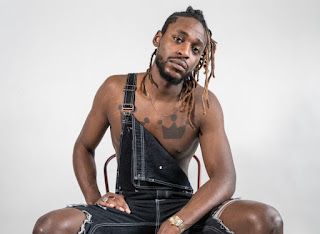 Part of Boston Magazine's Power 100, a Boston Music Award Winner, Professor at Berklee, and slated to play Boston Calling 2020 is an impressive resume. That resume is exactly what Cliff Notez has, and you can add more to it. Cliff Notez was always singing in choirs as a young kid, but mentions "I got my first beat program when I was 9 or 10, and that's when I was also recording on like tape and banging on drums." Music was also a norm in Cliff Notez's family; he talked about how his family was very into basketball and their religion. He mentions, "A large part of my family is very heavily into basketball, but what was really interesting for me as I grew up, that part of the family was also pretty religious, and they are also all musicians as well, and that's coming from the church. So seeing my uncles who were really dope at basketball command entire crowds as artists made me realize, "oh I can do both of these things."
After getting a degree in Psychology at Wheaton College, Cliff Notez received a full ride from Northeastern to pursue his master's degree in digital media. Some of the things he learned in digital media were film and audio production, which is a lot of the things Cliff Notez does now professionally. One of the companies Cliff Notez helped create using his skills from Northeastern, is called HipStory. According to their website, they are "a digital media production company responsible for creating unique, innovative, and inspiring art. We are redefining the future history of media by creating products that cultivate stories through professional audio & video production/engineering."
In his most recent album, "Why The Wild Things Are," Cliff Notez mentions, "I am getting more and more comfortable with putting out, it is feeling more and more like who I actually am." He can put an acoustic ballad to a mosh pit song next to each other in an album; Cliff Notez takes a lot of pride in molding a song to what it needs no matter what type of song it is.
Boston is a city of tough people; Cliff Notez has experienced that first hand. He has lived all over the city and mentions "racism and oppression is very heavy here, and then put that on top of real-world problems like growing up in the inner city, but I think that it breeds like if you are able to make it through it breeds some very special people." Cliff Notez also believes that there is a strong sense of community in the city; he believes that having a strong community will only lead to a better city.
As far as his music goes, Cliff Notez plans on doing "More of the same but at the same time none of the same." He plans on continuing to grow as a person and continue to push his music. One of his top priorities is to make himself feel great, become a better musician and artist, as well as tie his music into his difficulties and hardships. For right now, you can stream his music, which is available on all streaming platforms!