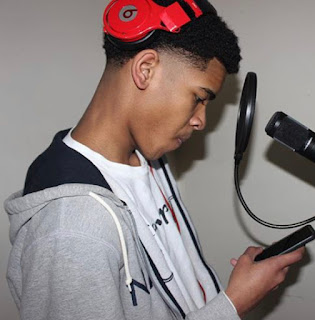 J Wavy didn’t grow up with a lot. He says, “My mom, my sister and I used to live in a shelter when I was like 7. We couldn’t always eat. I remember going to sleep hungry sometimes when my mom couldn’t provide. One time we had to use the oven as heat just so the crib could get warm whenever it was cold.” As a freshman in high school, J Wavy found music. Music was J Wavy’s escape. He would go to the studio regularly and quickly discovered his sound. Since then, he has released songs such as “Slide Thru,” “Company,” and “Thru It (Clueless) featuring Kingfrom98.”
As a kid, J Wavy never had anyone truly inspire him, but he had role models in music. He named artists such as Chris Brown, Lil Wayne, Ne-Yo, Justin Bieber, and he would listen to a lot of Spanish music. The artist who had the most significant impact on J Wavy was A-Boogie. He said, “Soon as I got older around 13 or 14, I started fucking with a boogie wit da hoodie heavy. His sound is just different from everybody else. He shows so much emotion in every song. He is so versatile. Not a lotta people can rap with melodies; he’s one of the few that do it perfectly. He had a big impact on my music career.”
A lot of people tell J Wavy that his sound is different from anyone in Boston. He credits that to where he was born, Queens, New York. He credits New York by saying, “being from NY lit no cap because that’s where hip hop first originated but also overall I feel like my voice is what stands out from everybody else. Not a lotta people can rap with melodies, and once I picked up on that, I fell in love with it, and I learned to better my voice over time.”
Throughout his career, J Wavy has been able to expand his audience outside of the country. He mentioned, “I got different people every day from different countries hitting me up on Instagram telling me how my music impacted their life, so it feels good to know my music is spreading positive vibes, especially for all my young fans. It feels like ima hero or something like that.” J Wavy also left a message for his fans saying, “Y’all gon see a couple of big features from y’all favorite artists and way more music videos. I’m going to start dropping weekly for y’all.”