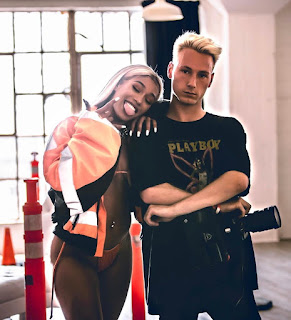 Shortly after he graduated high school, Jake The Shooter decided to move to LA. He described the transition from Massachusetts to LA as “honestly pretty easy. Of course I miss my family and friends back home in Mass but I love living and being in LA for the people and opportunity it has brought me. I couldn’t see myself located anywhere else for the next few years.” He started making videos with his brother at the age of 14. They would make videos of each other long-boarding downhills and then post them on YouTube. By the time Jake The Shooter was 17, he knew he wanted to pursue a career in Videography. He said, “I was still in high school and didn’t know what path to take but I knew I had a strong passion for creating videos and people would tell me I was good at it.”
Jake The Shooter has been able to work with some of the biggest names in the rap industry. They are A-Boogie, Kodak Black, Lil Tjay, Pnb Rock, Lil skies, Bia, Rapta, and Smooky MarGielaa. Jake has been able to film music videos, concerts, and much more for these artists. One of the artists he is closest with is Bia, she said “I love Jake. Jake is selfless and is always down to get what’s best for the team. He really understands how to portray an artist for who they are. I love that about him....He’s like my secret weapon”
Working with all of these artists has provided Jake The Shooter some exciting stories to tell. When asked about his most eye-opening experience, he said, “My most eye-opening experience was probably when Lil Tjay flew me to Vegas to shoot a festival for him. After going on that trip I realized I don’t really care how big the name of the artist is that I work with. I only want to work with people that genuinely fuck with me and my brand.”
Recently, Jake The Shooter launched his new brand Shooter Co. He describes Shooter Co. “as the hub for upcoming and mainstream music artists. We have a YouTube channel where we will be premiering music videos, interviews, and other content as well as an Instagram and TikTok page where we post all types of other content. The purpose of the brand is to give the music culture some new life and to build a family of new artists that we can take to the top.” Jake’s plan for the future is to continue to grow Shooter Co. as well as better himself as a video creator. Jake The Shooter’s work is as professional as it gets, and you can view it at Jake The Shooter or ShooterCo on YouTube.