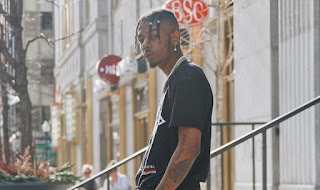 Maye Star’s parents met when they were working at WILD 1090AM radio, which was one of the only black owned radio stations in Boston at the time they met. Maye Star’s dad was always heavily involved in the radio station, whether it was music or sports, Maye Star was always around the studio. His craft originally started with singing and poetry, as he was heavily involved with choirs as a kid. Music is what Maye Star knows best. He has been rapping for almost 10 years and recently he released a short film titled “Trauma.”
In Maye Star’s short film “Trauma,” he is able to capture his emotions. When describing the process of creating the film, he said “there was a lot to write. I was really trying to capture those emotions and make sure to articulate how I’m feeling the correct way. It started getting out of hand on the media, but it’s been out of hand in these streets and my community. Now everything is getting crazy since the death of George Floyd, once that happened it was hard to articulate everything. I didn’t wanna say just anything from emotion. Since day zero I’ve been spreading awareness and making sure I play my part by making donations and being in the streets with my people. The film helped me articulate it in a way where I can help and inspire and not only that, something that is therapeutic for me, make it,  organize it, write it, film it, capture the emotion on the screen.” In the film, Maye Star was able to use a song from the very beginning of his career and one he released this year. The songs are titled “Heart to Heart” and “Broken.” Maye Star’s goal with his short film is to “help people cope and come to the realization and to always turn to and press play and take something from it.” He was also able to mention how grateful he is for all of the love and support to the video since the release.
Other than his short film, Maye Star has been able to do some amazing things throughout his career. At the age of 16, he was able to have the Patriots official anthem for when they traveled to Indianapolis to play the New York Giants in Super Bowl XLVI. From ages 15-19, Maye Star was able to spend a lot of time with King Los. He said “I used to do a lot of stuff with Los back in the day, going to the studio, making tracks with Los, he taught me a lot of stuff, performing and touring he taught me a lot of stuff from when he signed to Bad Boy and when he left and went back to Bad Boy. I was there through all of that and I learned a lot, I always felt like I had a foot in the door through natural networking, just doing my thing.” Maye Star has also been able to link up with the producer Sevnth, he has helped Star make some of his top songs such as “Threat.” “Dirty Side” and “Talk Down” which have all accumulated over one million streams combined on all streaming platforms. When it comes to Sevnth, Maye Star said “working with him is one of the biggest things I’ve ever done because it brought my sound to a whole new level.”
For the future, Maye Star has a new album releasing July 5th, and he is working on creating a production company, where his goal is to make all of his music videos like movies, as well as to make every video different and versatile so people know it's his work. Maye Star also plans on living out his main goal in life which is to “create and inspire.”