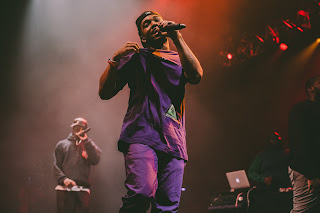 Meech is a part of Van Buren Records, one of the most known groups in the Boston area. However, Van Buren is more than just a rap group; they are a family. This past November, they were able to open for Cousin Stizz at the House of Blues. Meech describes the experience saying, “That shit was a moment that made me really believe in myself and my homies; this is what I’m meant to do. Really can’t wait to perform again, and travel the world putting on shows for supporters of our growing movement. It’s liberating.”
When Meech first started rapping, he was in high school. He would write and freestyle. He recollects his older brother having “burnt CD’s of artists like Young Jeezy, 50 Cent, Jay Z. That really influenced me to start making music and study the craft, the greatest choice I’ve ever made.” He also mentions some artists who were inspired Meech and helped him get through tough times as a kid. Those artists are Kendrick Lamar, Drake, Kanye, Lil Wayne, Jeezy, and Big Sean. He also credits Van Buren saying, “then seeing my VB brothers make music got me even more tapped in.”
On May 26th, Meech released an EP titled “I’ll Be Back Soon, I Promise.” The EP features tracks such as “Thief” and “My Women.” When asked about what he enjoyed the most while making this EP, he said, “Playing with different sounds and experimenting on shit that makes me feel good and inspired really. From the singing, production, mixing/mastering , I see a lot of color during this time in my life. A lot of hope and joy has come into my picture. Whereas last year when I dropped my EP NineFour’, I was going through some really dark experiences. I’m still battling those things, but it’s consuming me as it did last year. I’m blessed, and for that reason more dope shit will be coming.”
When it comes to his music, Meech says, “I’m all conscious and always in a state of “being,” constant thought. In the realm of music right now a lot of it is “fast food” like. People give you a project/record and completely disappear, not wanting to give you more of a deep dive into their art/world. I’m not for that at all, there’s many ways to express a project let alone a single. I put in a lot of thought into everything I do, hold myself accountable for my mistakes and flaws. I always start there, I’m a complex human who’s trying to find a way to get a thought across in a concise way that’ll make the listener feel first and then think. It’s a beautiful thing, not many artists can make you do that consistently.” As Meech continues his career, he wants to keep pushing his narrative every day, not just music. He mentions, “there’s so much thought that goes into my projects and songs, I want to bring that shit to life in various ways.”
When Meech needs guidance, he knows who to go to. He mentions, “Everyone in VB has helped guide me for sure, my brother & sister are great 3rd party listeners/reviewers of my work and giving me feedback on my demos. My videographer/photographer (@fufunsoup on social media platforms) is the biggest helper of all, from cover arts, to photoshoot ideas, life shit. That’s my brother, he’s made my visions and dreams come to life, always giving me hope and understanding of what I’m capable of.” He also has a lot of love for Boston and his home city of Brockton. Meech’s vision is that Van Buren can be at the “forefront of leaders coming from the scene.” The city of Brockton will always be the first spot that will come to mind for Meech. He says, “I owe it all to Brockton.”