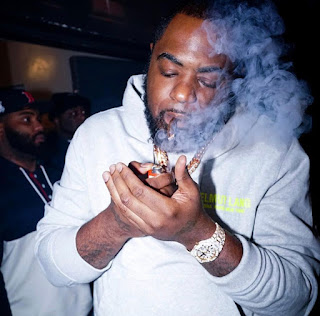 At a young age, Last Days’ uncle would push him to rap. He described rap as “a second nature to me.” In 2003, Last Days then decided to take music seriously. Since then, he has had record labels offering him million-dollar deals, and he has been able to participate in world tours. Before COVID-19 hit the United States, Last Days was able to go on the Griselda Tour, which included artists such as Westside Gunn, Conway the Machine, and Benny the Butcher. Last Days was able to tour 9-10 cities and described the tour as “an awesome experience, there was a great crowd reaction for a person they didn’t know, but I was able to grow a fanbase from it. The energy was always there.”
Recently, Last Days released a song titled “Big Flexin,” which features artists Aston Eighty and Bape Simpson. However, Last Days has a big track lined up that will be released soon. This song features Benny the Butcher. This song is something he is looking forward to releasing.
Last Days music always comes from the heart. He describes his music as “authentic.” He continues to say, “it's not lies, it's my life, and I express that to the people. When I rap, you can picture it.” In the future, Last Days’ fans should expect “Nothing but greatness, except that I am going to give them 125%. They should expect good music that I am proud of. He also has an album coming soon, but he mentioned it is taking longer because he wants to make sure everything on his album is perfect.
The city of Boston is something that means a lot to Last Days. However, he knows as an artist; it is hard to make it here. He describes the scenario as “Being from Boston trying to get on is like pulling an 85-year-olds person's teeth, the tooth doesn’t exist. It's hard to get on coming on from our city because there isn’t too much support here, music-wise.” Last Days is going to do whatever he can to make it and make his city proud. To help him on his journey, make sure to stream all the music Last Days has out!