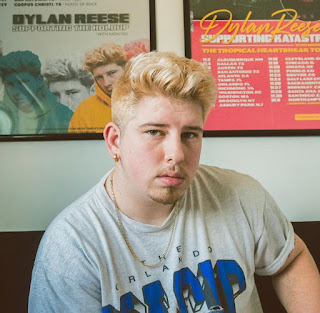 Around 2008-2009, Dylan Reese started to record in his bedroom. He talked about his beginning stating, “ I was making songs as a complete joke with a group of friends. They were more comedic/parody than anything else. But over time, I’ve learned that this is the best way I know how to express myself.” A couple of years later, Dylan soon learned how to work with music software and “the fundamentals of sound.” Dylan Reese has over 200,000 monthly listeners on Spotify and over 10 million streams on Spotify independently.
Dylan is originally from Chicopee, Massachusetts, and currently resides in Los Angeles. When asked about the move from Massachusetts to LA, he said, “It was pretty seamless, to be honest. I knew that I accomplished what I could’ve in Massachusetts - both in Western MA & Boston. I was planning on coming to LA years in advance, so I had built some relationships here, which made it a lot easier. Also, I made the move with my best friend, Bobby Hobert, which also helped. We have separate skills/careers, but we kinda went through it together.”
Other than living in Massachusetts and LA, Dylan has been able to tour the country multiple times. He claims touring has been his most significant opportunity in music so far, specifically the tour he was on last year with The Holdup. Dylan mentioned, “ it was the first time I was exposed to a brand new audience at that scale every single night. I learned a ton & built other relationships that lead to other opportunities already.”
When you listen to Dylan’s music, you notice a potent combination of R&B/Pop and rap music. To show off his rap sound, Dylan has done projects like RAP DYLAN and soon released RAP DYLAN 2. When talking about the projects, he explained, “The first RAP DYLAN project was something I did pretty quickly, just to showcase my ability to rap because I felt that it was overlooked, due to all of the R&B/Pop music I was putting out. I built quite the core audience since the last time I put out some rap stuff, so that was important to me. On the sequel, which comes out on 8/7…I just wanted to have some fun, and apply new found songwriting knowledge to the hip-hop genre. So this series of songs is definitely more well thought out & complete. But still, just having some fun & talking some shit.”
Dylan Reese has recently prepared for the release of RAP DYLAN 2 by releasing a few singles off the project. They are “CRUCIAL,” “SWITCH,” featuring Futuristic, and “WTM” featuring Boston’s Boy Sammy Adams. Working with Sammy Adams was an excellent experience for Dylan. He elaborated saying, “This was huge for me. Being from Massachusetts, Sammy was someone I’ve always looked up to. When I put out the first single CRUCIAL, he reached out & wanted to work. We’ve crossed paths on tour in the past, but it was great to have that co-sign & support from him. We worked on the song via Facetime & it came together quickly. We both love the final product & plan to work together in different ways moving forward for sure.” All three of the tracks off of RAP DYLAN 2 have been successful thus far, be ready for August 7th when the project drops because it will undoubtedly be his best work!