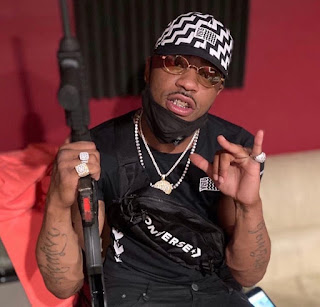 When attending Dearborn Middle School, Yahweh Almighty’s class was assigned to write the poem. At the time, he was dating a girl, and he used this poem to try and impress her after school. Little did he know, the teacher was going to make him read it in front of the class. Speaking on the experience, Yahweh Almighty said, “as soon as I finished the poem, the whole class started clapping and shit. I loved that attention. Not like an attention seeker but the attention when someone related, you know. Music was a way to express myself, at that time, the only way.” Since then, Yahweh Almighty has received co-signs from Gillie the Kid and Drake. Released songs such as “Derek Jeter,” and “Not Invited.” Yahweh Almighty has also gotten heavily involved with music behind the scenes; he has ghostwritten for artists, manages artists, and been on BET JAMS.
There are a few more reasons than just that poem in middle school that got Yahweh Almighty into music. He continues saying, “There are a few more reasons why I got into music. The first was the OGs from my hood. Back in the day, my OG Speedy would always have a cypher going, and the response from the guys was just dope, so I would join the cyphers occasionally, and they never son me. I guess they saw something in me as a youngin. The second was when I lost my mom. It was a hurt I didn’t want to express to ppl because I didn’t like sympathy or pity, so I would just channel my thoughts into music. The only way I could express myself. It’s been like that ever since she left this world.” Yahweh believes his music and journey is one of a kind. He elaborates by saying, “I believe we all have our own story! And mine is only mine. And I’m not afraid to be vulnerable and give the people me! Bottom line.”
Throughout everyone’s career, they have ups and downs. Some are lucky enough to have someone by their side. For Yahweh Almighty, this is his twin Nicky Boss. He has always been there for Yahweh, and he knows he will lead him in the right direction. For his home city of Boston, it is nothing but love. Boston means survival to Yahweh Almighty. He explains, “If you can survive here and make it out, you can survive anywhere! This is really the capital of the world for me! I LOVE THIS City! Yahweh Almighty has a lot planned for the future for people to stay tuned to. However, until then, keep streaming his new EP titled “You Think You Know!”