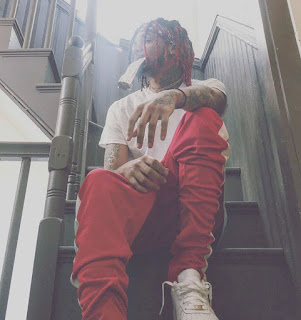 One year ago, Yung Treyski decided to move from Boston to Atlanta. He said the move was to “build my music career, make better music, and keep pushing from here on out.” Since the move, Yung Treyski has released EP’s titled “Treystation” (which has over 56.5k streams on SoundCloud) and “WhySo$erious” (which has over 40k streams on SoundCloud).
Even when Yung Treyski wasn’t taking music seriously, he would always be recording after school with his close friend AG. When he would listen to artists like Lil Wayne, Calboy, and Playboi Carti, Yung Treyski wanted to be just like them. However, he did not want to sound just like them. He said, “my music is different from others because I don’t sound or want to sound like anyone else. I don’t pretend I’m from here or there or to be this or that. I go off on anything, so I’m very versatile. All of my recent projects have been a broadcast of MY sound.”
A phrase Yung Treyski lives by is, “I don't care about being seen, I'd rather be heard.” However, he plans on changing this. In the near future, Yung Treyski intends to break his shell and make a lot of new music videos, but these music videos aren’t the only thing he has planned. Due to the success of “Treystation,” he has decided to make a deluxe version which will be released this month. He has also started planning for his next EP. Although it doesn’t have a title yet, Yung Treyski has put a lot of work into it. He said, “my Next Ep will be a Series with a bunch of special features with Underground rappers, upcoming artists, and even mainstream artists.” Until then, continue to stream his most recent EP, “WhySo$erious.”