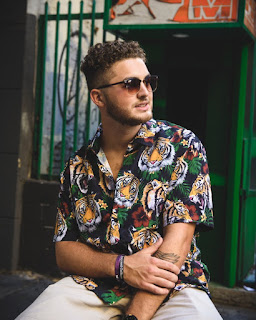 Currently residing in LA, B.Cave is a rising artist and producer. He started producing over four years ago, and rapping seriously a little over a year and a half ago. He credits a lot of his inspiration as an artist to the late Mac Miller, saying “one of the main reasons why I’m doing what I’m doing today is because of Mac Miller. After having been the soundtrack to my middle school/high school days, he developed into an amazing artist in all aspects of music and that became something I really strive for in my music as well. Even though i never got to meet him, he taught me a lot about chasing your dreams and following your passion in life, while still having fun along the way and I am forever grateful for him and his music.”

B.Cave has been able to build a great team around him. Including working with Booming Bay Management Group, and all kinds of artists and producers he has been able to work with in the past months. A few of the people that are most important to him are Jaymes Carey (The Founder of Exposed Culture), T-Cap, Max Mitchell, Jake B, as well as Casey Tucker, Tucker Mitchell, Sailor Kevie, and Gabby Desouza.

B.Cave knows currently his biggest opportunity is yet to come. Something that he released this past September, is a step in the right direction to getting towards that opportunity. He released a five song EP titled “The Scenic Route.” He described the project as “a collection of summer vibes inspired by Venice Beach and the feeling of watching a beautiful sunset as the colors change, with intrinsic feelings and experiences of love throughout. This whole year has been full of dark, and depressing times and I really wanted to create a project that could share some good vibes and energy. The project is fully produced/mixed by Max Mitchell and myself, and mastered by Big Jerm.”

B.Cave also has another project up his sleeve as we gear toward the end of this year. He said “ I will also be releasing another five track project later in the year called 'Isolation,' which is a little look into a darker side of me and my mental, created in some of my hardest days in quarantine. That will probably be released some time in November, and was fully produced by Jake B and myself, mixed/mastered by ClarkWork. Also, keep an eye out for many singles to be dropping throughout the upcoming months and next year.” However, until their release, make sure to stream “The Scenic Route” which is out on all platforms!