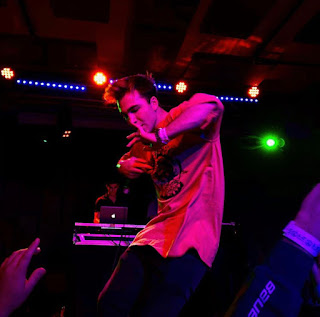 When Wiill was at the University of Connecticut working on his transfer applications, he started to find a serious interest in music. He would always mess around and freestyle at parties and attract crowds around him, and people would always try to get him to put his freestyles on SoundCloud. He now finds himself at Boston College with over 10,000 monthly listeners and over 300,000 streams on Spotify. Wiill’s brother Zach always made music. Will described this as “ the driving force in me making the change from a fan to an artist.”

Something Wiill has been told a lot is his music never has the same sound. Will elaborated on this saying, “all my music is so different will either be my greatest attribute or something I’ll struggle with my entire career.” He wants to push the boundaries of music like artists above him have; Wiill mentioned Mac Miller, Tupac, and Kanye as a few artists that have pushed this boundary. Wiill described his versatility, saying, “I think it’s a blessing. I don’t feel like the fact that my music doesn’t sound the same hurts me; it’s exciting to push the envelope a bit.” Wiill has met and worked with many people who have excellent connections in the industry so far. They all believe that Wiill has the potential to get to the next level in the music industry.

As a senior at Boston College, Wiill is trying to gain as much momentum throughout campus as possible. Wiill knows how tough it is to make it in the industry, especially in the Boston area, as an upcoming artist, and he is going to do whatever he can to create a new way of marketing for himself to help him stand out. Wiill has a lot of support from his close friends and family and mentioned how much of a blessing it is for him. Everyone close to him is supporting him in what makes him happy. Wiill’s career started with garage band and a $30 microphone, and he currently has a lot planned even with this crazy time, which he thinks can take him to the next level in music. Wiill recently released a song titled “Something on My Crown.” Make sure to check it out and all of his other music out on all platforms!