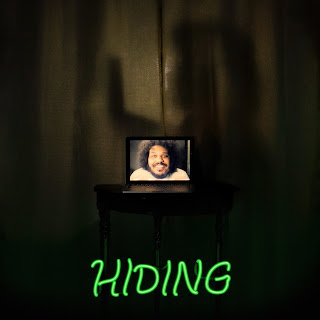 Who or what inspired you to make music?

I got very inspired young by the comedians. When you’re a kid listening to your favorite artists and picking up small things from them is how you learn how to rap. The cool kids, Wiz, Dom Kennedy, Stalley, and the whole backpack era shaped my young teenage raps. But the comedians I fell in love with I think shaped the way I think and approach everything. The goal is always to do music the way my favorites do comedy. Tell my stories no matter how tragic, in a way that people can laugh rather than cry when they hear it.

For Hiding, the process changed halfway through and partially it's because of my car haha. When we started really locking in on the project I was going to Phoenix Down Studios often, not telling people like I usually do, going in early in the morning instead of at night, and writing everything in the studio instead of before I get there. I usually get drunk as hell but once I started driving I started going alone, fully sober (besides smoking lol) and would just do a 9-5pm session like 3-4 times a week making BANGERS. Through those sessions, I probably got the bulk of the album done within like 5-6 sessions. Laser focus I hadn’t really felt before lol.

How does Hiding stand out compared to other albums you have released?

It’s my favorite work I’ve done. I think going into 2020 I became very comfortable in my skin knowing it's no more kid shit. I’m going to be the artist I was supposed to be years ago. I’m going to tell all my stories and be transparent and be a little more serious in my approach. I think so far the responses I’ve gotten are exactly what I wanted and was aiming for. “This reminds me of the Christmas I was introduced to.” And at the same time, “I’ve never heard you rap like this.” I’m super proud of it. I made this one with myself and the people I care about in mind.

What is your favorite track off of Hiding?

It changes a lot with an album this short and concise the whole thing becomes a favorite song. For the longest, it was Family Not Friends, but since the release, I think it’s been I Quit haha.

What do you hope people take away from Hiding?

I hope they feel it. I hope one or more of those songs really sticks to people and they’re able to feel better about a situation or circumstance that they’re dealing with, or at least (and as always) not feel alone. This one is super personal I keep imagining people in their room listening to it alone over and over the way I always consume my favorite music lol

Diving a bit back into your career, what was it like working with the late Mac Miller?

Really crazy yo. I was talking to Tim about it the other day and I said there’s not many artists/celebrities I could be around and lose my shit. And I didn’t with Mac either but he more had an intimidating presence as an artist. A small lovable fucking juggernaut of a talent. I felt super validated just as a writer to be able to make songs with him because like who the fuck am I haha. Still, he WASHED me on everything we did lol. It was like when you see all the best fighters in the world and then the Z fighters show up and He’s like Goku. Super humble, happy, and excited to compete but really knowing he’s gonna win.

How did Boston shape you into the artist you are today?

I always say it wasn’t any music that shaped me that came from here. It’s the people here. My friends, family, and even just strangers on the street there’s something here that makes us the way we are. I’m very different and me and the homies didn’t all grow up in the same exact situations but we are the way we are because of this place. We all share memories of places, foods, parental discipline styles, schools, and teachers, places NOT to be haha. I guess it’s probably the same for everyone wherever you’re from. It’s just culture.