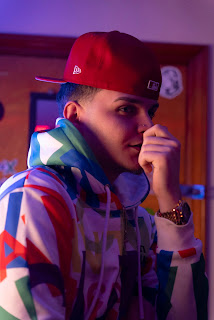 Starting to make music at the age of fifteen, Wavy Ry considers himself as more than a rapper. He is an artist. Wavy Ry describes music as “an art, not a trend.” At the beginning of this year, Wavy Ry was able to release a track called “Replace You” which featured Chief Keef’s Cousin Matti Baybee.

Wavy Ry had the opportunity to take a trip and stay in LA for a while to get in the studio and network. While talking about the trip, he mentioned “ I came across Paramount studios and locked in a session. Paramount has had so many great musicians that have recorded there. literally some of the people I grew up listening to have recorded their best tracks in Paramount Studios. So being there and walking through that type of Atmosphere, seeing all the plaques on the Walls from Ice Cube and Lil Wayne to Guns N roses, Linkin Park, Flo-Rida, so any of them throwback 2000 vibes were made there it was just dope to be there and actually record a song in the same booth as Icons.” He was able to take lessons from this trip in how he networks back home in Massachusetts. This taught him to be more consistent on things as an artist in preparation for his album which is called “Same Page, Different Book” and drops at midnight tonight!

In his music, Wavy Ry makes sure to “keep it smooth & talk about life, what's going on around me. Talking about the good & bad and just staying true to myself. Melodies are my thing, I like to deliver my music in a way that is very versatile and there can be something for everyone to vibe too. I use this to release any thoughts whether it's painful or uplifting. I put it into my own sound that can still be catchy no matter if it's a sad, love, happy, trap, or drill song.” This is something that will be delivered in his new album, and he knows that there is a song for everybody included in “Same Page, Different Book.”

June 29, 2021
Jamaine Ortiz is a professional boxer from Worcester, Massachusetts with a record of 14-0-1 with 8 KOs. Ortiz’s first professional win was on May 13th, 2016 over Josh Parker, and his most recent professional win was for the vacant World Boxing Council United States (USNBC) Silver Light Title, over Sulaiman Segawa on the undercard of the Mike Tyson vs. Roy Jones Jr. PPV on November 28th, 2020. Jamaine’s most recent fight was against Joseph Adorno and resulted in a draw. Jamaine is also a real estate agent and consistently works to help the Worcester community.  How did you first get into boxing? That relationship would be from going to the Boys and Girls Club and going to the boxing gym. It began by just fooling around, and giving me something to do, switching up the activities. My coach played a big role in being a mentor to me and kept me into it.  How did you get the nickname “The Technician” The nickname came from me and a good friend of mine and former World Champion Jose Rivera.
Post a Comment
Read more